Bangkok Street Food Vendor Wants to Give Back Michelin Star It seems that most chefs want a Michelin Star next to their name. The of course the restaurant but is it the golden egg that it promises to be. Of course it brings in the crowds of eager wana-be critics. The day after the food probably tastes as good as it the day before. However the new customers that it draws in travel the globe in gastronomical delights along with the badge of “I have eaten there” The ultimate food snobbery one liner often mouthed by people whom can not cook unless its a M&S ready meal.

So is the Michelin Star a far and just rating system and does it just elevate the price of the food. After all the staff must be worth more money if they helped get the star. So it is actually refreshing to read a story not about greed or vanity but about humble beginnings. We salute the Bangkok Street Vendor

People passing by Maha Chai Road, almost on the corner of Soi Samran Rat in the Phra Nakhon area of Bangkok, might be startled by the crowd snaking down the footpath around an impromptu assembly of plastic tables. As they wait in line, crowd members take out their cell phones to snap pictures of the “crab omelet queen,” newly famous after Bangkok’s first-ever Michelin Guide awarded her eatery Raan Jay Fai one Michelin star.

Ever since Michelin — the a French tire company that also publishes international dining guides — announced that it would be publishing a guide to Bangkok, many wondered whether the guide, famous for favoring European fine dining, would include the city’s thriving street food scene in its starred recommendations. (“Most people I spoke with in the local food scene believe Michelin will give a nod… to some of Bangkok’s generations-old shop houses,” wrote Eater contributor Micaela Marini Higgs last summer.)

When the guide came out in December, Raan Jay Fai, a popular eatery in Bangkok’s Old Town, was the only street food venue in the city to be awarded a star, appearing alongside 13 other restaurants with one star (and three with two stars). Since the announcement, the distinction has drawn the attention of tourists, foodies, and even a couple of curious tax department officials to Raan Jay Fai’s small space.

“I wish I could give the star back already,” says Supinya Junsuta, Raan Jay Fai’s chef and owner — but at this point, everyone, including the 72-year-old cook herself, calls Supinya “Jay Fai.” Jay Fai made the spot famous with her signature khai jeaw poo (crab omelet), poo phad phong karee (stir-fried crab made with curry), and noodle dishes; her desire to give the Michelin star back wouldn’t be the first time a chef expressed that wish. 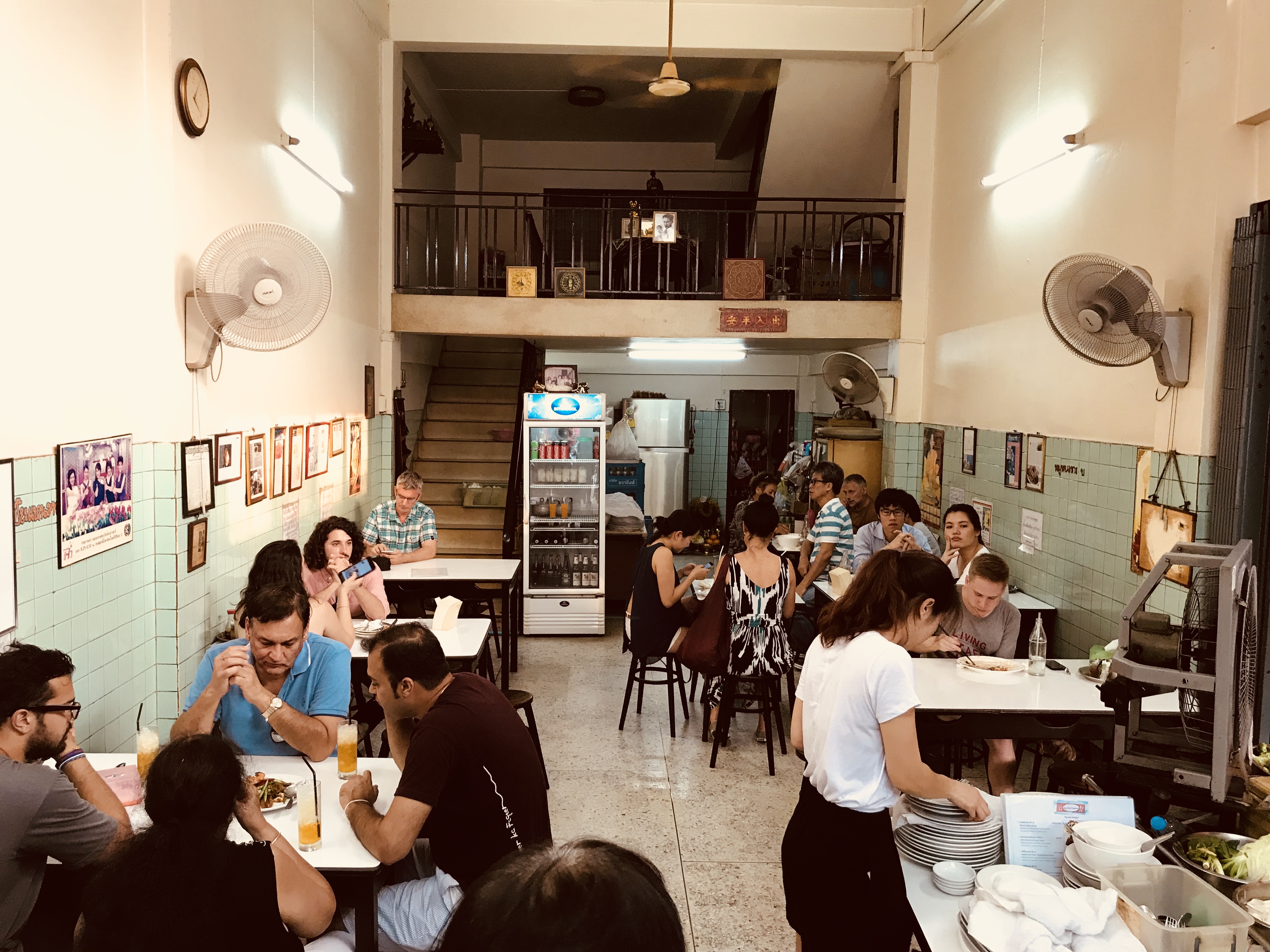 On an afternoon two weeks after the Bangkok Michelin announcement, Jay Fai tries not to take her eyes — prudently covered with ski goggles, her trademark — from the hot oil pan above the charcoal flames where she cooks beaten eggs with crab meat. She seems annoyed by the sudden attention of her restaurant and concisely responds to questions from journalists, while not for a minute diminishing her movements to prepare the orders that never stop coming.

“Many people come just to see and take pictures and not necessarily to eat,” she says. Even so, wait time for tables can be up to two hours during the busiest times of day, such as right after the restaurant opens at 3 p.m. A handwritten sign on the register warns: “Time not guaranteed.”

In the small room with less than a dozen tables, three waiters work to serve all the guests. Varisa Junsuta is exclusively in charge of the queue, managing the names and calling the clients in order to seat them. Jay Fai cooks alone behind wooden screens that separate her from the crowd. It’s a safety measure to protect the patrons from the scalding oil where she deep fries many dishes. In addition to wearing goggles to protect herself, Jay Fai covers her head in a black beanie and uses long skimmers to stir the food. Which  Kidneys Are Best for Cooking It depends on what type of dish you are cooking, for quick cook  recipes… I often make homemade pesto without pine nuts but never without garlic. It was a hectic day and it was…