Celeriac The Ugly One

Probably close to being one of the worlds ugliest root vegetables. Would you dare to pick one of those weird looking root vegetables of the shelve. What would you do with it once you got it home into your kitchen, make sure its dead and start. If I am honest it wasn’t until recently that I had actually tried celeriac and it was a good friend who asked me to cook it. This was for one of our big Saturday nights in. We have these  regular basis and I always try to cook something different. As we have 3 kids (and a boxer) its not always easy to get a babysitter so our understanding friends come to us. An even better use is my Celeriac And Turnip Gratin Recipe.

A very good question, well celeriac tastes a little like celery but nuttier. I also liken it to fennel, a hint of aniseed background flavour.

How do you Cook Celeriac

Celeriac can be cooked in the same way as any other root vegetables. Boil, roast, sauté’ and braise. Once you have tried a celeriac recipe you will be hooked.

So back to my big night in, what was I going to do with this thing in my kitchen. I decided that a puree would be good so the internet I did seek. Nothing appealed to me so improvisation was needed, after all its just a root veg. So I cut it into chunks and then placed in salted boiling water until tender. I then drained the celeriac and placed in a blender, seasoned with salt & pepper. At this point it was a little dry and rough in texture so to the fridge I went. Adding a little cream until the mixture  became smooth and silky. The nutty flavour I really enjoyed so to enhance it a little more I gave a few dashes of sesame oil.

As I was a little nervous about cooking celeriac for the first time so I had cooked this early in the morning in case of any disasters. The next step was to remove it from the blender into a clean saucepan with another splash of cream and a knob of butter. I added the extra liquid to the celeriac as reheating later would obviously draw out some of the moisture. Yes it was fantastic, the friends thought it was fab and even the wife enjoyed it. The resin this recipe came about was because of the waste. Celeriac comes but in one size. Large or very large and quite quickly goes soft after you have cut some off. It is best kept in the refrigerator either in a plastic bag or brown paper bag. Preservation was the game and the same for turnips. Firstly I cut up the celeriac in small thin pieces along with the turnip and place into a bowl. Next I add some melted butter to the bowl to stop the root veg from browning from exposure to the air. Season well with salt & pepper and mix. Then I measure out enough of the turnip and celeriac to fill a mini loaf tin and then place the mixed veg into a freezer bag. Usually I get anything between 8 to 12 portions of my Celeriac And Turnip Gratin Recipe mix. admin Celeriac The Ugly One Probably close to being one of the worlds ugliest root vegetables. Would you dare to pick one of those weird looking root vegetables of the shelve. What would you do with it once you got it home into your kitchen, make sure its dead and start. If I am honest it ... Read more Sides gratin british Print This
Serves: 2 Prep Time: 00:15:00 Cooking Time: 00:45:00 00:45:00
Nutrition facts: 200 calories 20 grams fat
Rating: 5.0/5 ( 1 voted )

Remove the outer surface from the celeriac Cut into quarters and then thinly slice, a mandolin may help Thinly slice the turnip Crush chop 1 clove of garlic Melt a little butter in a frying pan and add the ingredients (thyme) Gently fry for 5 minutes then add the rest of the cream and butters Simmer for 10 minutes Place into your mini roasting dish Roast in the oven 190 for 45 minutes

Serve with and Sunday roast

When I need the celeriac and turnip to accompany my Sunday roast I remove it from the freezer in the morning. As it is thinly sliced it doesn’t take long to defrost. After it is defrosted just follow the instructions on the recipe.

The Fear Of Celeriac

Once you have made my celeriac and turnip gratin recipe and overcome the fear you can try some of the many other celeriac recipes. 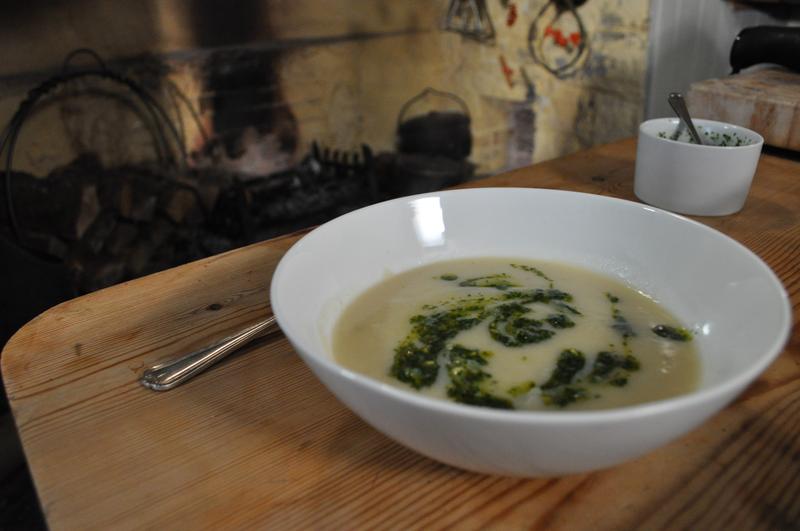 Melt the butter in a large, heavy-based pot over a medium-low heat. Add the celeriac, leek, potato, garlic and onion, season generously, and gently sweat the vegetables until they’re all starting to soften (this will take about 10 minutes).

For those who are a little more adventurous, with capers and celery, gnocchi with bone marrow, and with walnuts.

I hope this post has given you a little inspiration and confidence to give the ugly celeriac a go in the kitchen. Of course the first recipe you need to try is my celeriac and turnip gratin recipe.

If you have any great recipes with the ugly root veg please share with our readers. Ugly veg are the perfect solution for cheap dinner ideas.

Travels to France Normandy Its the summer holiday time, time to dig into that drawer with all the junk inside… A great budget winter recipe using leftover ham and to add a little burst of flavour, green pesto. I had… Now the coronavirus is beginning beginning to take place in this world. It seems that everyone around us is going…